Renowned author and founder of KIVA.org

The connection between two individuals is a powerful agent for social change. This idea animates the work of Jessica Jackley, who co-founded KIVA, the world’s most successful microlending site. On stage, Jackley delivers an upbeat and enduring message: you can synthesize your disparate skills, as she did, to create a meaningful life and career.

Jessica Jackley is a Founder and former Chief Marketing Officer of KIVA, the world’s first peer to peer microlending website. KIVA lets users lend as little as $25 to poor entrepreneurs around the world, providing affordable capital for them to start or expand microenterprises. Named one of the top ideas of 2006 by The New York Times Magazine, and praised by Oprah, Bill Clinton and countless others, KIVA is one of the fastest-growing social benefit websites in history. Jackley was also recently praised by Forbes , named as one of 5 rising stars in Healthcare, Education, and the Environment.

Since its founding in 2005, KIVA has loaned over $500 million from lenders to entrepreneurs across 206 countries. For all its success, KIVA remains focused on a simple mission to connect people through lending to alleviate poverty, one person at a time. Jackley was also a founder and CEO of ProFounder, which joined forces with GOOD in 2012 to create innovative tools and experiences for entrepreneurs to crowdfund.

Jackley first saw the power and dignity of microfinance while working in East Africa with a microenterprise non-profit. Convinced that social change happens across all sectors, Jackley has worked in public, nonprofit, and private organizations including the Stanford Center for Social Innovation, Amazon.com, Potentia Media and many others.

Jessica currently serves as a Venture Partner with the Collaborative Fund, focused on investing in creative entrepreneurs who want to change the world through emerging technologies. She is also the director of the board for Habitat for Humanity and is a Visiting Practitioner at Stanford University’s Center for Philanthropy and Civil Society. Also an educator, Jackley was Barer Visiting Fellow at Drew University, taught Global Entrepreneurship at the Marshall School of Business at USC, and lectures frequently at other universities around the country. She holds an MBA from the Stanford Graduate School of Business and a BA in Philosophy and Political Science, and serves as an active advisor and board member on several organizations championing women, microfinance, tech, and the arts. Discussing a wide range of timely issues, from economic development to women’s empowerment to Web 2.0, she reminds us that, at the heart of social entrepreneurship, the relationships we form with each other and the extent to which we believe in each others potential are the most powerful forces for positive change.

Jackley’s book Clay Water Brick: Finding Inspiration from Entrepreneurs Who Do the Most with the Least will be published in June 2015 by Random House. 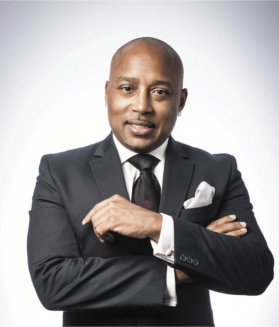 A young entrepreneur, an industry pioneer, a highly regarded marketing expert, and a man who has surpassed new heights of commercial and financial success are just a few ways people have described Daymond John. Over the last 20 years, Daymond has evolved from one of the most successful fashion icons of his generation to one of the most sought after branding experts, business, and motivational speakers in the country.

Daymond’s creative vision and strong knowledge of the marketplace helped him create one of the most iconic fashion brands in recent years. FUBU, standing for “For Us By Us”, represented a lifestyle that was neglected by other clothing companies. Realizing this need in the marketplace, Daymond created the untapped urban apparel space and laid the groundwork for other companies to compete in this newly established market.

Daymond grew up in the community of Hollis, Queens, quickly becoming known as the birthplace of the new genre of music called Hip-Hop, with acts like RUN DMC and Salt-N-Peppa rapidly making names for themselves. Being surrounded in this influential neighborhood helped spur the inspiration for his clothing line that would ultimately change the fashion world.
His first foray into the apparel market came when he wanted a tie-top hat he had seen in a popular music video but could not find one for a good price. With the sewing skills he had learned from his mother, Daymond started making the hats for himself and his friends. Realizing he was on to something, Daymond made a sizeable order of the tie-top hats, sold them on the streets of Queens one day, and made $800 in just a few hours. There was a buzz about Daymond’s products that simply could not be ignored.

Based on that early success, Daymond recruited some of his neighborhood friends and FUBU was born. They created a distinctive logo and began sewing the FUBU logo on all sorts of apparel, including hockey jerseys, sweatshirts and t-shirts. The brand hit a tipping point when Daymond convinced Hollis native and Hip-Hop superstar, LL Cool J, to wear FUBU for a promotional campaign. This was the catalyst behind the entire Hip-Hop community supporting the new brand and instantly giving it credibility. In need of start-up capital to keep up with demand, Daymond and his mother mortgaged the home they collectively owned for $100,000. Soon, the home was turned into a makeshift factory and office space.
FUBU gained even more nationwide exposure when Daymond and his partners traveled to the industry trade show Magic in Las Vegas. Despite not being able to afford a booth at the event, the FUBU team showed buyers the distinctively cut, vibrantly colored sportswear in their hotel room. The company came back to Queens with over $300,000 worth of orders. FUBU soon had a contract with the New York City-based department store chain Macy’s, and it began expanding its line to include jeans and outerwear. A distribution deal with Korean electronics manufacturer Samsung allowed their designs to be manufactured and delivered on a massive scale. With the brand transcending into the mainstream markets, FUBU recorded annual sales of $350 million, placing it in the same stratosphere as designer sportswear labels such as Donna Karan New York and Tommy Hilfiger.

In 2009, John joined the cast of the ABC entrepreneurial business show, Shark Tank, produced by acclaimed TV producer Mark Burnett. As one of the “Sharks”, Daymond and four other prominent executives listen to business pitches from everyday people hoping to launch their company or product to new heights. Investing his own money in every project, Daymond becomes partners with the entrepreneurs helping turn their dreams into a reality. Millions of viewers tune into the show as Daymond demonstrates his marketing prowess and entrepreneurial insights.

Due to the increasing amount of requests from major companies, Shark Branding was formed to provide companies with the marketing insights that have made Daymond’s companies successful over the years. The firm consults companies on innovative strategies to connect with their consumers more effectively by associating with the world’s most influential celebrities, musicians, and personalities. Whether it’s activating a celebrity endorsement or integrating product in a music video, companies rely on Shark Branding to utilize Daymond’s contacts and relationships to produce real results and sales.

Daymond entered the literary world with his first book Display of Power: How FUBU Changed A World Of Fashion, Branding And Lifestyle which tells the story of his awe inspiring journey and provides a roadmap for those who aspire to succeed in business and in life. Daymond followed up his with his second book, The Brand Within: How We Brand Ourselves, From Birth To The Boardroom, which examines the loyal relationships companies seek to establish with the public by attaching celebrities to their brands and the instantaneous impulses consumers exhibit when purchasing a product. Drawing on his cutting edge experiences in the fashion business, as well as his hard-won insights developed as a sought-after marketing consultant to trendsetters and tastemakers, the author argues that branding relationships have now seeped into every aspect of our lives.

In recognition of his contributions to fashion and the face of American business, Daymond has been celebrated with some of the most prestigious awards including: Brandweek Marketer of the Year, the Advertising Age Marketing 1000 Award for Outstanding Ad Campaign, Crain’s Business of New York Forty Under Forty Award, and Ernst & Young’s New York Entrepreneur of the Year Award.